How to attend events without having to get off your sofa 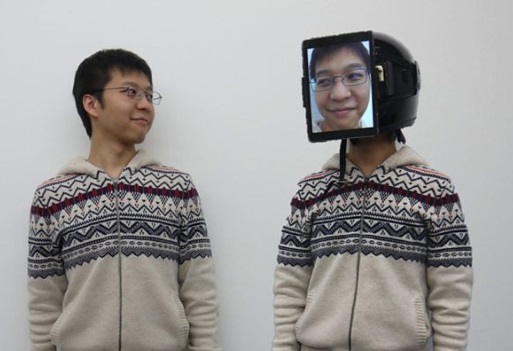 Do you sometimes dream of being able to attend important events without having to leave the comfort of your sofa?

As the weather gets colder and the dark nights start drawing in, the temptation to stay relaxing on your La-Z-Boy recliner or sofa becomes even greater than usual. Well fear not, a pair of Japanese scientists may have come up with the answer – a ‘Human Uber’.

The invention, which is known as the Chameleon Mask, allows you to go along to parties, meetings or events without actually having to step foot out of your living room. It works by getting a person to stand in for you by wearing an iPad which is livestreaming your face.

The idea is that you will still be able to see and talk to people at the event without having to be there yourself. It could be particularly useful for those who need to go to conferences, meetings or celebrations in another country.

Although the concept sounds a bit like something out of a science fiction film, it could actually make its way to the UK over the next few years. Augmented reality specialists Jun Rekimoto and Kana Misawa unveiled their Chameleon Mask earlier this year at MIT Tech Review’s EmTech Asia conference in Singapore.

The creators said: “The remote user can not only communicate with people who are not in the same place but also communicate physically by making direction such as body gesture with surrogate's limbs.”

But while the invention may seem to be the answer to wedding weariness or Christmas party fatigue, the challenge may be finding a workforce willing to wander around with an iPad strapped to their heads.

Fans of US sitcom The Big Bang Theory may be feeling a slight sense of déjà vu. The show’s character Sheldon Cooper came up with a similar idea in an episode screened back in 2010.

Sheldon’s Mobile Virtual Presence Device was a robot which contained a monitor showing his face in real time with a microphone and camera so he could see and hear what was going on. He came up with the robot stand-in as an attempt to extend his life by avoiding the hazards of life but quickly abandoned the plan when his virtual self came face-to-face with his hero, Apple co-founder Steve Wozniak.