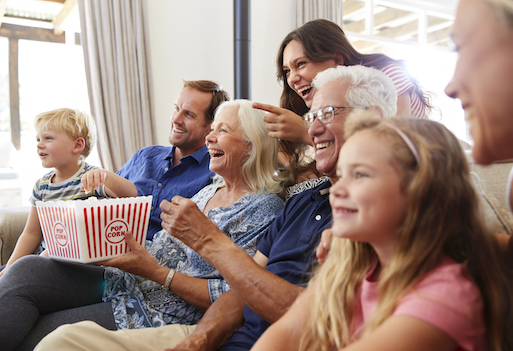 Sunday (January 19) is National Popcorn Day and is the perfect excuse for planning your own movie night.

According to the UK Cinema Association, the average cost of a cinema ticket now stands at around £7.22, although prices vary across the country with the Odeon’s flagship Leicester Square venue in London charging up to £40 for an adult. And once you factor in the price of snacks – popcorn often costs around the £5 mark – and added payments for premium seating and extra legroom, a trip to the cinema can end up being a pricey affair.

So if your bank balance is still recovering from Christmas, why not save some money and plan a movie night in the comfort of your own home? Settle onto your La-Z-Boy recliner or sofa, get your favourite snacks ready and take advantage of the best movies streaming services have to offer.

Make your own popcorn

There’s now so much choice when it comes to popcorn but if you fancy something a bit different, you could have a go at making your own. Unpopped popcorn kernels are cheap to buy and last a long time so you can stock up your cupboards to make sure you always have them on hand to cook up a movie snack. Making your own popcorn is usually a healthier option too as you know exactly what you are eating and don’t have to worry about additives or preservatives. Although you can use the microwave to make your own popcorn, aficionados of the snack swear by cooking it on the hob instead. Use a decent saucepan with a heavy bottom as this will distribute the heat more evenly and minimise the risk of ending up with any unpopped kernels. Put two tablespoons of oil – olive oil or coconut oil is best- in your pan and heat it on a moderate heat. Don’t be tempted to turn your hob up high as popcorn can burn easily.

Try two kernels first to test the temperature and put the lid on your pan – when they pop, remove your pan from the heat and add the rest of the kernels (around half a cup) and stir them into the oil. Keep your pan off the heat for about a minute before putting it back on a medium heat with the lid on. Every so often, give the pan a little shake to mix the kernels off and when you hear them start to pop, tip the lid to let some of the steam escape. When the popping noises have slowed down to about one every few seconds, take your pan off the heat and remove the lid. Tip your cooked popcorn into a bowl and add the topping of your choice. The whole process from start to finish should take around 10 minutes. If you have a sweet tooth, you might want to try mixing your popcorn with a teaspoon of sugar and a teaspoon of cinnamon. If you prefer your snacks to have a kick, you can mix a teaspoon of chilli flakes with two teaspoons of mixed spice and one teaspoon of cracked black pepper.

Check out these new releases

If you’re a Sky Cinema customer, then Mary Queen of Scots is the new premiere for National Popcorn Day. This historical drama about power struggles and rebellions sees Margot Robbie take the role of Queen Elizabeth I, while Saoirse Ronan plays her cousin Mary Stuart. Other new releases on Sky Cinema in January include Glass, the final instalment of M Night Shyamalan’s Unbreakable trilogy. This psychological superhero thriller stars Bruce Willis and Samuel L Jackson.

There’s a number of hit movies which are new to Netflix this month, including American Beauty, Ferris Bueller’s Day Off, The Talented Mr Ripley and What Lies Beneath. Another well-known movie to become available on the streaming service this month is Inception, a science fiction thriller about thieves who break into people’s dreams to steal their big ideas. Starring Leonardo Dicaprio, this 2010 movie made more than $800 million at the box office.

If you prefer new releases, check out the latest blockbusters available on Sky Store or in the DVD charts. Downton Abbey, the Movie has just been released giving fans of the show the chance to catch up with the Granthams and their servants as they prepare for a Royal visit. Other new releases due at the end of January include Joker, the tale of how Batman’s nemesis came to be a super-villain and Judy, a biopic starring Renee Zellweger as Judy Garland which focuses on the star’s attempts to revive her career with a series of performances in London.