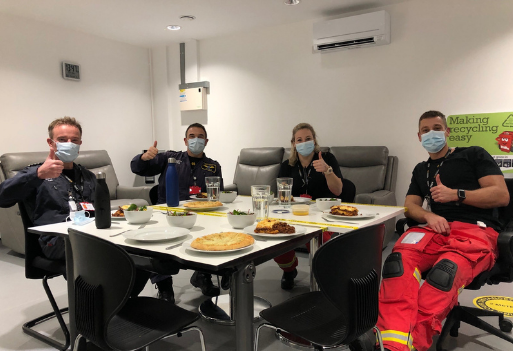 To celebrate Air Ambulance Week 2021 (6th-12th September), La-Z-Boy UK is proud to announce how we've donated a series of sofas to Air Ambulance crews around the country to give their workers somewhere comfortable to relax during a busy shift.

Across the UK, air ambulances carry out around 70 lifesaving missions every day, funded almost entirely by charity donations. They are often used when patients are injured in places that are difficult to access with a traditional ambulance or when someone needs to be urgently transferred to a specialist unit.

We've donated sofas and chairs to five different air ambulance charities across the country in a bid to give something back to the community and provide much-needed support to their hard-working staff and volunteers.

Adam Morley, head of marketing said: “The whole team at La-Z-Boy UK are delighted that we have had the opportunity to help out air ambulance charities and be able to provide a number of crew rooms with our sofas and chairs. In such a high pressure and demanding environment, what better way can there be to sit back and relax than in a La-Z-Boy recliner in between call outs.”

One of the recipients was SCAA - Scotland’s Air Ambulance Charity, which is able to reach 90 per cent of the Scottish population within just 25 minutes of being called out.

Nick Harvey, deputy CEO at SCAA, said: “The donation from La-Z-Boy of their super comfortable leather chairs for our air ambulance crews at our Perth Base has been a very welcome addition, providing a great space for our crews to recharge between flying life-saving missions across Scotland.”

We made another donation to Essex and Herts Air Ambulance Trust (EHAAT), which is currently building a new facility at North Weald and refitting and extending the Earls Colne airbase. And Great North Air Ambulance Service (GNAAS), which responded to 1,262 call-outs in the north east, Cumbria and North Yorkshire in 2020, also received two recliner sofas.

Tim West, a paramedic at GNAAS, said: “It’s vital that our team can relax between call-outs so they are a welcome addition to our crew room.”

Natalie Church, director of operations at Magpas Air Ambulance, which serves the East of England, said: “We’re very grateful that La-Z-Boy have so kindly donated two recliner sofas to the Magpas Air Ambulance team, replacing our (now quite old) settees. The Magpas doctors, critical care paramedics and flight crew often experience extremely demanding and challenging shifts, so it’s really important for them to have a space where they can relax between missions.

“These sofas will also be particularly appreciated on night shifts (7pm – 7am), providing a great spot for the medical team to get some sleep if possible too.”

The fifth set of furniture was given to Dorset and Somerset Air Ambulance, which now has two of our reclining sofas in its crew rest room.

The charity’s CEO Bill Sivewright said: “The on-duty crew must be fully ready to deploy at a moment’s notice and this means that even when back at base, down time is at a premium; completing records of missions, checking and restocking equipment, updating themselves on possible changes to weather and even the status of regional hospitals.

“To be able to relax in such style, as offered by the La-Z-Boy sofas, is a fantastic boost to spirits.”

We'd like to take this opportunity to thank the charities for all their work.