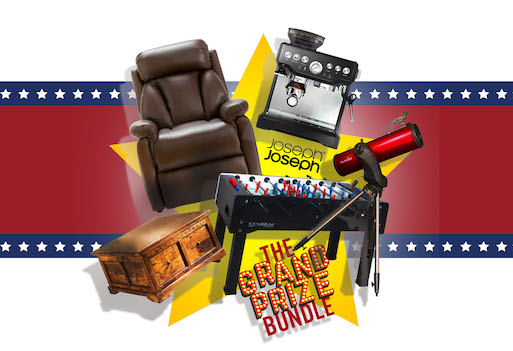 The Friends-inspired grand prize features two La-Z-Boy Georgina handle recliners in 100% leather upholstery, a foosball table, a coffee machine, an apothecary table, a state-of-the-art telescope and a selection of the latest kitchen gadgets and utensils. Each element within the ‘Home Grand Prize’ bundle is inspired by one of the principal characters from the show, with a total of three grand prizes to be given away at the end of the promotion.

The bagel range, including favourites such as The Original and Cinnamon & Raisin, have also been promoted via TV idents aired during reruns of Friends on Comedy Central and Comedy Central Extra. The idents feature a recipe collection inspired by beloved characters including Rachel, Monica, Phoebe, Joey, Chandler, and Ross.

On top of the grand prize, shoppers will also be given the chance to win one of a thousand other prizes every week, including Friends™ Hugsy toys, Friends™  aprons, Friends™ games as well as money-can't-buy New York Bakery Co. bagel tins and tote bags.

Christina Honigfort, Head of Marketing at New York Bakery Co., said: “With our unique on-pack promotion in partnership with Friends, we want to offer consumers the chance to win something extra special, and fun, for their home — an iconic grand prize we hope they will love as much as we do.

“You don’t get more New York than bagels and Friends and this is our way of bringing a taste of the city to the UK. With all the activity we have planned in the coming months, we’ll be sure to take our messages around taste and authenticity far and wide to millions of shoppers each week.”

To be in with a chance of winning, consumers simply visit the designated microsite www.nybco-bringithome.com and enter the unique code on their five-pack of New York Bakery Co. bagels by the closing date of 26th October 2020.